We’d long been waiting for a weekend when Huw could tear himself away from his DIY to come out to play and finally the chance materialised this weekend.  (In fact he came out to play in the evening as we 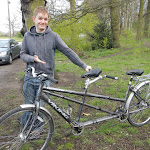 ll so I can only assume that he’d run out of paint and/or sandpaper and found himself at a loose end. :))

The plan for a ‘fun’ bike day (as opposed to the usual ‘terrifying hurtling down hill’ bike days we seem to have been doing recently) where we’d get to go on the unicycle and backward steering bike.  The highlight was to be teaching  Muffin to ride a bike as, having reached the grand old age of 25 and never 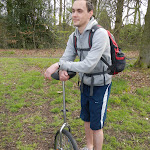 having learnt, we thought it was time he gave it a go.

Knowing what I’d been like at Appletreewick last year, when the lads had to teach me to ride as I’d not been on a bike since my Raleigh Tommahawk aged about 7, I was sure it would provide hours of entertainment as we’d have to push him along and act as stabilisers.

Hours did I say?  We didn’t even get a minutes worth of entertainment from it.  The clever sod scooted on it for about 5 feet and then just put feet to pedals and disappeared off down the road!  He didn’t fall off once!  Where’s the fun in that?

So, the challenge has now been set to give Muffin a new challenge each month and see what else he can take to like a duck to water.  (The already mastered ice climbing on his first outing earlier this year and now he’s got biking under his belt.)  Any ideas gratefully accepted.  (The biggest challenge we seem to have been able to come up with s 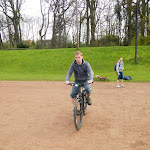 o far is getting him to visit a National Trust property.  He seems to feel that visiting them with drain all his youth away and leave him a shrivelled husk of a man reading Saga magazine and smelling of wee and biscuits.  So, not far from his current state of being anyway. :))

Seeing as how we didn’t get the entertainment of watching Muffin fail we had to come up with some alternatives to keep us amused.  A speed race and snail race both proved I have very limited skills on a bike and the game of bike polo put the nail in the coffin.  Mind you, it was very intimidating having Huw bearing down on you at speed on a tandem when you are trying to concentrate of balancing on the bike whilst kicking a football.  (Biking and football: two sports I’m both equally useless at so I never stood a chance really.)  It pretty much ended up as a two horse race with the rest of us w 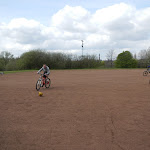 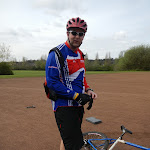 but it provided us with a giggle and meant we’d burnt enough calories to deserve tea and cake at the cafe.

Whilst sat outside eating, we also got to enjoy the rather macabre re-enactment of the sinking of the Titanic on the boating lake using a cardboard Titanic and polystyrene iceberg.  It was one of the more surreal sights I’ve seen recently.

Let me have your ideas for ‘Challenge Tom’ and we’ll 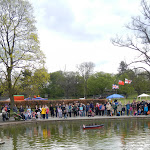 see if we can find something he doesn’t seem to be, annoyingly, naturally talented at.