Last weekend saw me heading up to Braemar with SH and two of his mates to stay at the Rucksacks bunkhouse with the aim of getting some cross country skiing done. 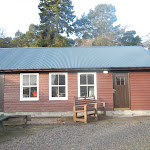 Unfortunately the snow levels weren’t enough to allow for the skiing so Chris will be going off to join SH on his Icelandic adventure having never put a pair of skis on his feet before!  Brave chap. 🙂

Saturday morning saw us head off to tackle Lochnagar.  Having driven about 6 miles down a single track road I was surprised to find, at the end of it, not only a whole load of other cars but also a toilet block and visitor centre.  That did explain the inordinate amount of grit on the road but make me feel slightly cheated as I thought we’d have the place to ourselves.  I needn’t have worried however as after we passed a couple of people on the way up we only saw about another three groups all day.  (And I’m sure it wasn’t just because everyone else was hidden in clag. :)) 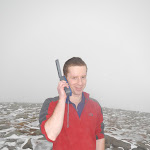 We set off in bright sunshine and had this until the plateau just short of the summit of Cac Cairn Beag.  On the summit, SH decided to try out his new satellite phone and struck a pose reminiscent of Del Boy in ‘Only Fools and Horses’.

Descending from the summit we dropped down beside the waterfall and finished off by walking around Loch Muick.  About half way round we encountered a gr 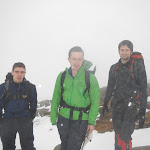 oup of young lads who told us a woman who’d hurt her leg was just around the corner.  The cold sweats set in thinking I’d have to put into practice my first aid training from last week (Step one: jazz hands.  Step two: don the elbow length gloves.)  but fortunately her husband had already patched her up and set off to call Mountain Rescue.  ‘A ha,’ thinks SH ‘I’ll help save time by calling from my sat phone.’  Erm, maybe not.  Not only did the normal phones have no reception down by the loch but neither did the sat phone.  Lets hope the guys don’t find themselves behind anything tall when they’re stuck in a snow drift in Iceland.

As we neared the car park we were passed by the two Mountain Rescue jeeps and as the light was beginning to fade we picked up the pace and headed off to the pub for pints of Caledonia Ale and venison burgers.

Sunday morning started misty but you could just tell it was going to be a stunning day.  The sun was already trying to burn off the mist and, again, there wasn’t a breath of wind in the air.  We parked just below the Glenshee ski resort and struck off 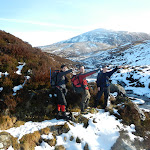 along the stream and up to our first Munro of the day.  (I believe we did three but I’m yet to find out what they were.  Sorry but I can’t pronounce the Scottish names let alone remember how to spell them!) It was wonderful to have the grouse fly out in front of us and see the mountain hares, in their white winter splendour, chasing each other across the hill side.

The sun was so warm, and it was such warming wor 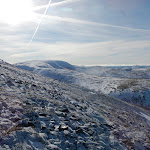 k walking through the snow on the ascent, that I stripped off and resorted to walking in my bra in an attempt to cool down.  I got a slightly odd look off a guy at the top but the rest of the local wildlife didn’t seem to mind.

The views from the summit were amazing and you could see for miles in every direction.

We continued round and on reaching the next summit spotted some cross country skiers.  You could see SH go green with envy but  we managed to distract him by having a go at making an impromptu sun dial 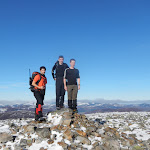 The way down at the end of the day saw us donning the crampons and making our way down the pistes of the Glenshee resort.  There was just enough snow left on them to make us all jealous and determined to get in a morning’s session before heading back home the next day.

It wasn’t to be though: lying in bed on Monday 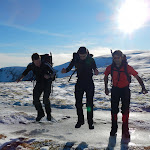 morning it was quite clear that the weather had taken a turn for the worse.  You could hear the wind howling outside and looking up the only view was of a dark and stormy sky.  I phoned the ski centre in the unlikely hope that it was better up there (as if three miles was really going to make that much difference!) but when she was clearly not trying to sell me any tickets I realised it must be bad.  So, reluctantly, we packed up and set off for home.

It had been a great weekend in a lovely bunkhouse which I can’t recommend highly enough.  (Not only did we get a clean bathroom towel each day but we also got a clean dish cloth each day and she put the lads’ toothbrushes into mugs for them!)  Hopefully next time I go there I’ll be able to get some cross country skiing or some snowboarding done but even without the snow sports it had been well worth the trip up. 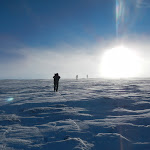