On the Friday evening inspired by a reasonable forecast Alan Hardie, Jon Massey  and Iain Carter headed up over the border for a weekend raid in Glencoe.

We slept inside and outside the car at Loch Lomond and after a good four hours sleep continued onwards arriving at eight. The objective was Summit Gully a 450 metre grade 1 snow and ice climb, a worthy tick in anyone’s book. 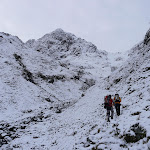 Soon we were off, up the steep path at the side of Loch Achtriochtan (near the Clachaig Inn road junction). An hour and a half slog brought us to the foot of the mountain were we went to and fro trying to find the gully entrance. Eventually we found it and it began with a steep but straightforward ascent up snow. About half way we arrived at the cave pitch. This is an abrupt buttress obstructing the gully and normally gives a good ice pitch. However there was no real ice cover and we escaped by traversing round a rather dodgy grass slope with the snow breaking away from under our feet. Ice axes in frozen turf provided the only security. This was short lived however and we soon continued onwards and upwards arriving on a cloudy summit after about four and a half hours work. 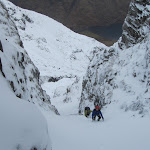 There wasn’t much in the way of views but we went on up to Bidean Nam Bian summit before returning down the ridge and back down the glen. The bunkhouse in Tyndrum provided more comfortable accommodation than the previous night and with Sunday morning rain we decided to bail out and head for home.