Okay, so we all chickened out of going on a dip in the Loch but in fairness it was bloody freezing – and that was inside the hut!

Instead, after seeing a number of Mercians off on their way home a group of us went on a stroll up to Inchree Falls.  It was still cold and damp weather wise but we did see a brief glimpse of the sun. 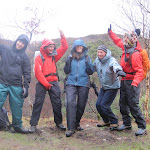 After our soaking we retreated to the pub in Onich where we encountered a couple of waifs and strays. 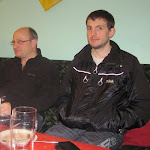 In order to escape the attentions of Mr Boom (he’s from the Moon don’t you know?) we took ourselves into the games’ room where we were forced to play pool and giant Connect Four.  We forgot to take the muzzle though and we nearly got booted out for a certain member’s use of bad language in front on small children.  Suffice to say, her New Year’s resolution is to swear less. I’ve got a fiver on it not even lasting until tomorrow. 🙂