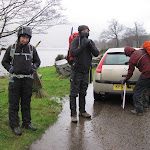 A small group of Mericans attempted Mam Na Gualaine. The morning started bright and relatively dry but half way up it appeared that someone had turned out the lights and we were plunged into darkness as the blizzard descended. We made a brave attempt to push on for the top, and it was looking like we were going to make it, but then the gale force winds came in and just shy of the top we were all on our knees. 50mph winds knocked us to the floor and although we’d been keen to carry on it was obvious we weren’t going to be able to do so safely. Or at least carry on at anything other than snail’s pace on our hands and knees. 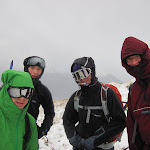 The descent seemed incredibly quick and before we knew it we were back in the car and heading off to the Ice Factor to scout out availability for climbs if we had more bad weather. Then it was back to the hut for tea and home cakes and to await the arrival of our chefs for the night.